The first rule of punk is “be yourself.” 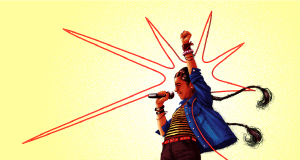 Twelve-year-old María Luisa O’Neill-Morales (but you’d better call her Malú) arrives in Chicago with her Mexican-American mother after leaving Gainesville, Florida, and her white father behind. Malú’s parents are amicably divorced, so Malú isn’t happy about moving across the country.

Malú loves punk music and makes her own zines, so she decides she’ll start her first day at her new school with very punk makeup. Unfortunately, it turns out that her makeup is considered a distraction and a violation of the dress code. On top of that, she makes an instant enemy of a popular girl in her class.

Doing her best to ignore all the jibes, Malú gravitates towards other misfits and decides to start a punk band with them for the school talent show that will take place during the Fall Fiesta. Even though there are auditions, Malú finds out that typically everyone who auditions gets a spot in the show, so she’s surprised when her band is left out. After some investigating, Malú discovers that the principal kept her band from being a part of the show because it coincides with Fall Fiesta’s big anniversary and she wants the show to be on the traditional side. This, however, wasn’t specified in the school talent show flyer and Malú will not let it stand.

"The First Rule of Punk" is not just about the music and style of punk, but also about social justice: how you stand up for yourself and others, mainly the oppressed. Standing up to unfairness and seeking justice are strong themes in this book along with friendship, identity and culture.

You may like The First Rule of Punk if you like "Stef Soto, Taco Queen" by Jennifer Torres and "Roller Girl" by Victoria Jamieson.